Some say Christmas has roots in pagan traditions. Others believe it’s the best time to splurge cash and indulge in mouth-watering Christmas foods, guilt-free.

But for Filipinos, known to celebrate the longest Christmas season in the world, this is the best time to spend quality moments with family and friends. After all, Christmas is the birth of Jesus Christ, a God of love.

So while you’re busy wrapping gifts and preparing that good ol’ noche buena, take time to remember why we’re celebrating Christmas in the first place.

Too excited for the holidays? No problem. These 7 fascinating facts about Christmas will surely kill your boredom: A popular Filipino Christmas song, “Ang Pasko Ay Sumapit” was originally written in Cebuano by Mariano Vestil and composed by Vicente Rubi. First known as Kasadya Ning Taknaa (“How Happy is this Time”), it was later translated into Tagalog by the legendary musician Levi Celerio.

According to the CCP Encyclopedia of Philippine Art, the Visayan song has its origin in the celebration of the Cebuano feast of Pili-Kanipaan, usually held in December. [Image source: www.slideshare.net]

6. A bloody battle between Spaniards and Chinese rebels in the Philippines is now known as the “Red Christmas”. 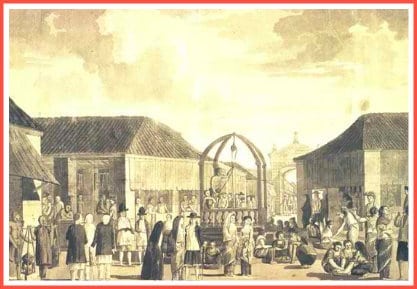 Erected in 1581, the Chinese quarter in Manila called “Parian” was where many Chinese engaged in retail trade. This drawing by Juan Francisco de Ravenet y Bunel was the only known illustration of the place before its demolition. (Source: www.aenet.org)

Long before Spaniards conquered the Philippines, the Chinese had already established their settlements here. But due to their “constructive role in the economic development of the country”, they were not given fair treatment by the Spanish government.

Apart from being taxed twice the amount required of Filipinos, the Chinese, particularly the unbaptized, were ordered to reside in a separate quarter called “Parian” outside the city walls. Driven by these injustices, the Chinese revolted several times against Spain between 1574 and 1762.

When the British occupied in the Philippines in 1762, the Chinese collaborated with them to massacre the Spaniards on the Christmas Eve of the same year. Unfortunately, one of the plotters revealed the plan to a Filipina who then relayed the secret to a Spanish priest from Mexico, Pampanga.

After receiving the news, then Governor General Simon de Anda led the Spanish forces to Guagua, Pampanga where they secretly attacked the Chinese rebels. The event, which occurred on Christmas day, was later known in Philippine history as the “Red Christmas”.

5. Jose Rizal and the first Christmas tree in the Philippines. However, records suggest that it was the Germans who indeed started the Christmas tree tradition in the 16th century. It was later introduced in the U.S. where it was initially met with resistance and seen as a “pagan symbol.”

In the end, the Americans embraced the iconic Christmas tree and even popularized it in the Philippines in the early 20th century. But for some historians like Prof. Ambeth Ocampo, the idea of decorating Christmas tree first came in the country much earlier than that. In fact, it was Jose Rizal who first mentioned it through his 1886 drawing of a Christmas tree, his interpretation of Hans Christian Andersen’s “Little Fir Tree.”

In a letter written in Berlin for his eldest sister, he said:

“(The Christmas tree) is decorated with tinsel, paper, lights, dolls, candy, fruits, dainties, etc., and at night time, it is shown to the children, and around this tree the family celebrates Christmas.”

4. Jingle Bells was the first song played in outer space. On December 16, 1965, astronauts  Thomas P. Stafford and Walter M. “Wally” Schirra Jr. played a trick on the team at Mission Control which later turned out to be a milestone in space flight.

While on a pre-Christmas mission aboard Gemini 6, the two astronauts reported that they had sighted an unidentified object that “looks like a satellite going from north to south” with its pilot “wearing a red suit”. They then proceeded to sing “Jingle Bells”, the first song ever played in space, accompanied by a harmonica and bells which are now displayed at the Smithsonian Museum. [Image source: Flickr] We all know that Rudolph and his legendary red nose are just fictional. But have you ever wondered if a reindeer gets a red schnozzle in real life? Turns out, it really does. And there is scientific data to prove this claim.

According to the scientists from the Erasmus Medical Center in the Netherlands and the University of Rochester in New York, reindeers have 25% more capillaries in nasal membrane than humans. These blood vessels carry red and oxygen-rich blood towards the nose to keep it warm during a cold winter.

In addition to that, the capillaries also help in regulating the internal body temperature because like other mammals, reindeers don’t sweat.

2. The real face of Santa Claus. Saint Nicholas of Myra (270-346 AD) is known around the world as the real Santa Claus. But unlike his fictional counterpart, Saint Nicholas was anything but the fat, rosy-cheeked and jolly gift-giver we’ve grown accustomed to.

With the help of forensic technology and Saint Nicholas’ skeletal profile from the 1950s, Caroline Wilkinson, a facial anthropologist from the University of Manchester in England, was able to reconstruct the face of the famous 4th-century saint.

The facial reconstruction, produced by the Image Foundry in England, shares almost the same white hair and beard with the sleigh-riding Santa Claus. However, these were intended to capture the “style of the time” as well as the appearance of a man who died in his 70s.

The image also shows Saint Nicholas with olive skin, wide chin and brow, dark brown eyes and a broken nose–allegedly sustained by Saint Nicholas during the persecution of Christians under the reign of Emperor Diocletian.

1. In Spain, the traditional nativity scene features a figurine called “caganer” or “the defecator”. For the past two centuries, the nativity scene in Catalonia, Spain has been accompanied by a fascinating yet bizarre figurine called the caganer, which literally means “the shitter”.  Although the ceramic figurine appears normal on the front, it actually has a bare backside and is in the act of defecating.

Its exact origin may be hard to identify but the caganer has been considered as an important part of Catalan tradition (just like the “parol” for the Filipinos). Legend has it that whoever dares not to put a caganer in the nativity scene will experience a “very bad year collecting vegetables”. The caganer is usually seen hidden in trees or placed under the bridge, but never in the front of the nativity scene.