MRT is one of the three rail systems that make up the rail infrastructure of Metro Manila.

It started its operations in December 1990 and added the last three train stations (Ayala, Magallanes, Taft Avenue) back in July 2000.

In this handy guide for commuters, we’ll discuss everything you need to know about MRT stations and all the nearby landmarks/establishments connected to each of them.

Related: How to Commute Through LRT: An Ultimate Guide to Manila’s LRT 1 & 2 Stations

MRT vs. LRT: What’s the Difference?

The LRT is currently owned by the Philippine government. It’s operated by the Light Rail Transit Authority (LRTA) which is associated with the Department of Transportation (DOTr) and the Light Rail Manila Corporation.

MRT Fares, Schedules, and Other Things You Should Know. 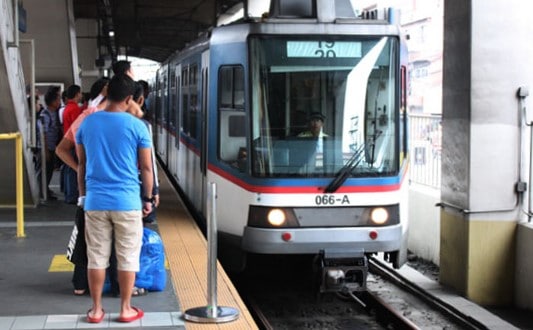 The price of a single journey MRT ticket ranges from P13-P28. It depends on your destination and the location of the station you’ll be coming from.

These are the four types of tickets available for MRT passengers:

You can also purchase a Beep card so you don’t have to wait in line while trying to purchase single journey tickets.

The Beep card is a stored-value smart card which is valid for 4 years from the date of purchase. You don’t have to fill out any forms. You just have to pay for the initial load and then you can start using the Beep card.

There is no minimum load amount but it has a P10,000 maximum load limit.

You can use this card for other modes of transportation like LRT1, LRT2, BGC Bus, Citylink Coach Services, and most P2P buses in the city. The card can be loaded through beep loading kiosks in all MRT and LRT stations, as well as bus stops and convenience stores. It can also be loaded online through the Coins.ph app.

For North-bound passengers, the train route is simply the reverse of the one previously mentioned, starting at the Taft Avenue station located in Pasay City and ending at the final Quezon City station (North Avenue).

MRT trains are designed to carry 23,000 passengers per hour and per direction daily. The trains are also designed to run at a maximum speed of 65 kilometers per hour. Without any delays, it can take as little as 30 minutes to go from the first to the last MRT station.

a. Items Allowed Inside MRT Trains.

After announcing that liquids (including bottled drinks, perfumes, and other cosmetic/skincare products) are not permitted inside MRT trains, the management released a list of liquid products allowed which are the following:

The Complete List of MRT Stations (with Landmarks and Nearby Establishments). If it’s entirely possible, avoid the rush hour when riding the MRT. The lines are unbelievably long during rush hour and the trains are always jam-packed.

The rush hour begins again at 4 PM but it’s still manageable. The worst kind of rush happens around 5:30 PM so make sure you either ride the MRT from 4 PM to 5 PM or wait it out and just come back at around 9 PM.

If it’s possible, ride the MRT on stations that are not as crowded as the others.

The most crowded ones are Cubao and Ayala stations. Some of the stations with fewer passengers are GMA-Kamuning, Magallanes, and Ortigas. You can take the MRT from these stations instead of Quezon Avenue, Taft Avenue, and Shaw Blvd, respectively.

Once you’re on the train, find a good location where you’re not far from the door and you have something to hold on to.

3. Bring a handy pouch when commuting.

It can be frustrating to rummage through your bag in order to find spare change or Beep card while you’re about to board the train.

To solve this problem, buy a small pouch where your keys, spare change, Beep card, and ID can fit. This way, it will be easier to find the usual stuff that you need when commuting.

Make sure to wear a breezy shirt made with breathable material so you’ll feel cool even if you’re cramped inside a train with hundreds of people.

5. Be polite and considerate.

In a crowded place and a stressful setting, being kind can go a long way.

Follow the rules and don’t try to cut the line or push people around. Make sure to let the passengers get off the train first before making your way inside. Always cooperate if it’s for the benefit of passengers like you.

Using a Beep card during a commute is a great way to save time. You won’t have to fall in line to buy tickets so you can head straight to the security check. It can also be used for other modes of transportation like LRT1, LRT2, P2P Buses, BGC Buses, and a lot more.

7. Try to memorize all the MRT stations.

If you’ll be commuting daily, it’s very helpful if you memorize all the MRT stations. You can’t always check MRT signs since you’ll be struggling to stay in your chosen spot.

Memorizing the stations will give you a lot of time to prepare before getting off. You can slowly move closer to the door if you’re just a couple of stations away from your destination.

8. Be calm and enjoy the moment no matter how chaotic it can be.

Riding the MRT can be such a hassle but once you find your tiny spot in that jam-packed train, you can try and be happy in your own little world.

You can listen to music while the trains go from one station to the next. It’s an amazing way to start your day right or end it on a good note.

Incidents of theft at MRT trains happen almost every day. The best way to avoid being a victim of theft is to always secure your belongings.

Hold on to your bag and make sure that you can feel it in case someone tries to do something suspicious with it. There are different types of pouches that you can hide inside your body and where you can secure your valuables like money, IDs, credit cards, and ATM cards.

1. Is it more affordable, more convenient, and faster to ride the MRT regularly than the other modes of transportation?

Riding the MRT is undoubtedly more affordable than riding buses and even jeeps.

A trip from Taft Avenue to North Avenue only costs Php 28. It’s also a lot faster since it doesn’t get affected by the heavy traffic along EDSA.

When it comes to convenience, it’s hard to say that MRT is more convenient to ride than buses, jeeps, and others. During rush hour, the trains are really crowded and you’ll have to wait in line for a long time just to buy tickets and go through the security check.

2. Do MRT trains leave on time?

MRT trains usually leave on time. However, over 10 trains get delayed every day according to daily reports from the MRT management. Some of the reasons for delays are the lack of available trains and malfunctioning trains.

3. Are small kids allowed to ride the MRT?

4. How safe is this mode of transportation?

MRT is generally safe for passengers. However, you must still be cautious and alert since there might be thieves around.

Yes, there are special coaches for PWDs, as well as women, children, and the elderly. Most of the time, guards are very helpful when it comes to assisting PWDs.

Anna Pamela R. Capistrano is an experienced content writer who is currently pursuing a bachelor’s degree in multimedia studies at the University of the Philippines – Open University. She has been working as a freelance writer for over 6 years and has created a wide range of content for various websites. Aside from writing, she also loves cooking, baking, dancing, and watching K-dramas. As an Aquarius woman, she’s passionate about making the world a better place one step at a time.

9 thoughts on “How to Commute Through MRT: An Ultimate Guide to Manila’s MRT Stations”